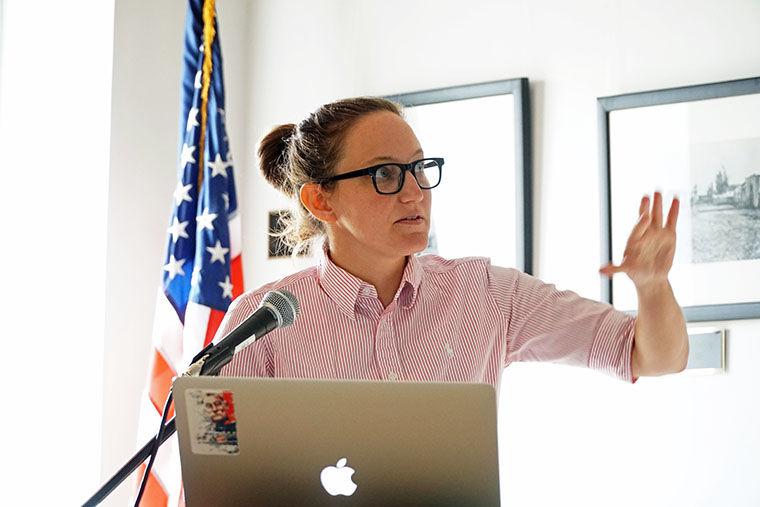 Center Affiliated Researcher Bonnie Ludka spoke at the first meeting of Climate Champions to summarize the science of the climate change crisis, with a focus on the San Diego region. She highlighted contributions from Scripps Institution of Oceanography along the way. Ludka encourages teachers to reach out to Scripps experts as they developed their curriculum.

In her talk, Ludka expressed that even researchers who work on climate change can feel intimidated by the vastness of the climate issue. “As scientists we tend to have a deep specialization in one aspect of climate change, and our broader understanding of climate change comes from many specialists working together. There is no single climate scientist hero, but our society loves heroes, and many of us wrestle with the unnecessary perceived burden that we have to single-handedly provide all the answers.”

“I wanted to dispel the myth that climate change researchers are unapproachable. I think many of these researchers, especially those who have generously contributed to climate reports for the San Diego region, would take time out of their busy schedules to influence curricula for the entire county. It is such important work”, Ludka explained. “I know how daunting it can feel to talk about climate change, so I imagined that these teachers might feel intimidated to teach the subject, and perhaps even more intimidated to reach out to the scientists here. There is so much disinformation out there, that sometimes we have the false idea that we have to know everything to say anything.”

As respected climate communicator and scientist Katherine Hayhoe says, “the most important thing we can do to fight climate change is talk about it.” Ludka leaned into Hayhoe’s wisdom and said “That is true for climate scientists, teachers, students — all of us. Climate change is such a big issue —  we need everyone, in every aspect of life, working together as climate champions.”

At subsequent meetings, the Climate Champions group heard from Kavli Civic Science Fellow Rose Hendricks and UC San Diego Political Science Professor Fonna Forman. Hendricks, a UC San Diego alumni, is an expert on the cognitive science of communication, now focusing on public engagement with science and climate. Forman is the director of the Center on Global Justice, and co-author of the publicly available “Bending the Curve” course on climate change solutions with CCCIA Affiliate Veerabhadran “Ram” Ramanathan.

The group was also encouraged to attend Ram’s Virtual Birch Aquarium Perspectives Lecture Bending the Curve. Additionally, many members attended a discussion with Scripps alum Ayana Elizabeth Johnson and co-authors about their new book of diverse essays, poems, and art on climate change, called “All We Can Save: Truth, Courage, and Solutions for the Climate Crisis.”

The group is particularly interested in incorporating discussion about local climate solutions, climate justice, and Indigenous knowledge, to empower students to make positive change within their own communities. Ludka says she continues to join the group meetings when she can, “to learn from these impressive climate communicators, to offer guidance within [her] expertise, and to act as a resource for connecting the teachers to other research(ers) at Scripps.”

Bonnie Ludka is a physical oceanographer and postdoctoral researcher working with Adrian Borsa, using satellites to map coral reefs around the world. Her previous work focused on wave-driven beach erosion and recovery, on natural and engineered sandy coasts in San Diego.

Climate Champions project leader Nan Renner is a research associate at CREATE, Senior Director of Learning Design and Innovation for Birch Aquarium at Scripps, and steering committee member for the UC-CSU Environmental and Climate Change Literacy Project and Summit (ECCLPS).