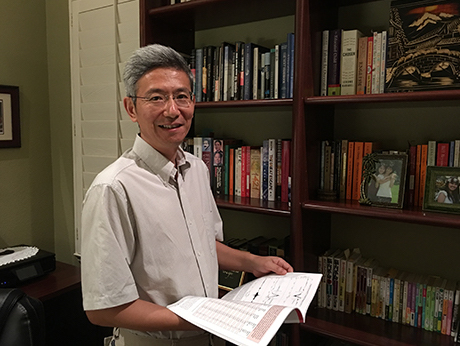 The American Meteorological Society awarded Dr. Shang-Ping Xie, a research affiliate of the Center for Climate Change Impacts and Adaptation, with the 2017 Sverdrup Gold Medal Award “for fundamental contributions to understanding the coupled ocean-atmosphere feedback processes involved in climate variability and climate change.” The Sverdrup Medal is named after Harald Ulrik Sverdrup, oceanographer and meteorologist who served as Director of the Scripps Institution of Oceanography from 1936 to 1948.

Xie’s research centers on ocean-atmosphere interactions and their role in climate formation, variability, and change. He carries out both diagnostic and modeling studies, using observations and numerical models of the ocean, atmosphere, and their coupled system. Geographically, his work covers all three major oceans of the Pacific, Atlantic, and Indian, and monsoons of Asia, Africa, and the Americas.

“When I started graduate school in the 1980s, ocean-atmospheric coupling was a revolutionary idea that emerged from studying El Niño,” said Xie. “I was among the first generation of graduate students who wrote theses in this emerging area of research, inspired by scientific pioneers who have been honored with this award.”

Learn more about Dr. Shang-Ping Xie and our other Research Affiliates here.