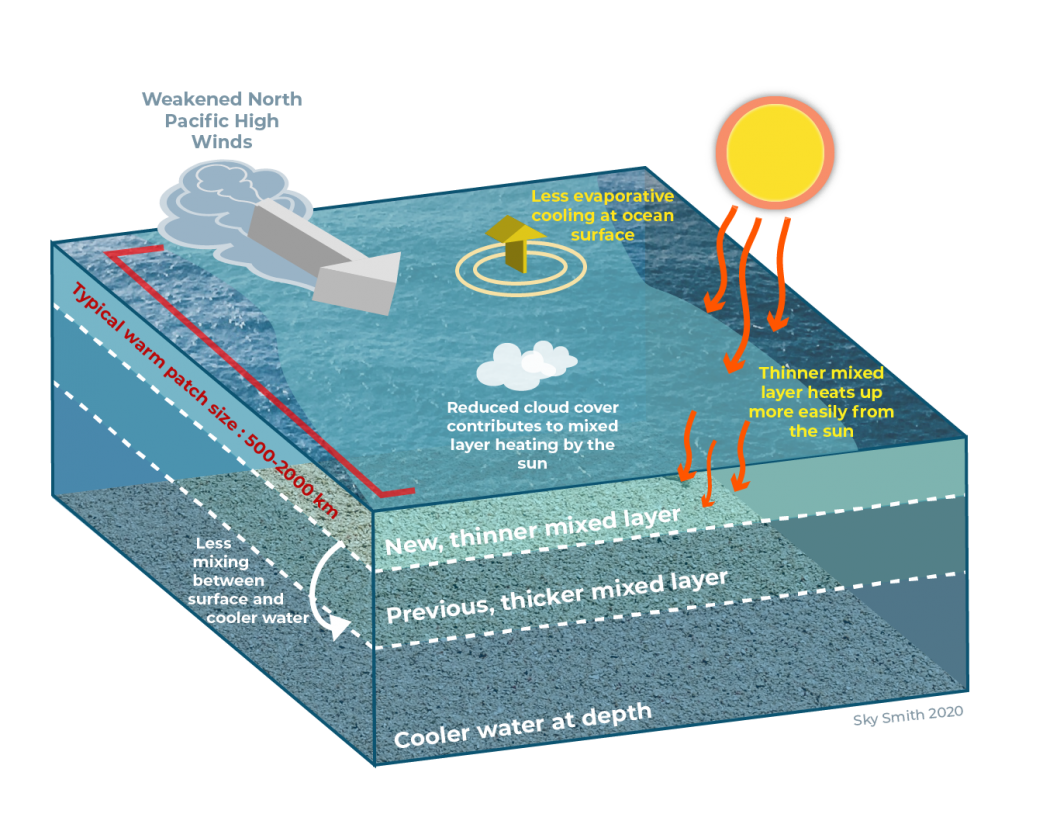 In the last decade, several incidents of extreme ocean temperatures have occurred off the coast of California, commonly referred to as marine heatwaves. The unusually warm waters and dramatic fisheries changes associated with these events raise questions about how and why these marine heatwaves occur, as well as what the implications are for marine life. Explore this FAQ to learn more about what’s causing marine heatwaves and their impacts in California.

What is a marine heatwave?

How do marine heatwaves form off the coast of California?

Between Hawaii and California, a semi-permanent high-pressure area, termed the North Pacific High, generates winds that blow south towards the equator for most of the year. These winds allow the ocean to cool through evaporation and help the upper layer of the ocean mix with deeper waters. These important winds can weaken, such as when the ocean further south (in the subtropics) experiences warmer than usual temperatures in the summer months. Weakened winds mean that the top layer of the ocean, which is normally well-mixed with the cooler waters under it, becomes thinner. In turn, this thin mixed layer heats up more easily, from the sun and other processes, so that it can reach high enough temperatures to be considered a marine heatwave.

When have the most recent marine heatwave events occurred off the coast of California?

The local ocean in California has experienced several marine heatwaves since 2014, but the most significant periods of warming are as follows:

How do marine heatwaves impact wildlife and fisheries?

Warmer sea-surface temperatures and reduced ocean mixing over extended periods in the Pacific impact fish reproduction, geographic ranges, migration patterns, and food availability. During marine heatwaves, species such as hammerhead sharks, bluefin tuna, and pelagic red crabs have been observed traveling further north as their warm water habitat expands. During and following the 2014-2016 marine heatwave, northern anchovy and Pacific sardine populations fluctuated in surprising ways between record-high population counts and dramatic lows. Specifically, anchovy populations skyrocketed, while sardine populations remained low. These baitfish species serve as a food source for the larger fish that support our commercial fishing industry, as well as for sea birds and sea lions. Prior to the 2014-2016 marine heatwave, low populations of both anchovy and sardines had been linked to emaciated sea lion strandings and seabird deaths along the California coast.

The population growth of sea lions and some sea birds during the 2014-2016 marine heatwave was accompanied by species declines elsewhere. For example, poor feeding conditions under warm water temperatures led to low survival for cold water salmon during the same marine heatwave event. While it is clear that recent marine heatwave events have had species “winners” and “losers”, each event has brought new surprises for fisheries. Scientists are still assessing the response of California’s ocean ecosystems as ongoing and new observations are recorded.

Not necessarily. However, a warm upper ocean can serve as a better habitat for certain algae species.  When these algae grow at a rapid rate, it results in algal blooms. While not all blooms in California are harmful, some of these algae species generate deadly toxins, such as domoic acid, that become more concentrated as they move up the food web. This can trigger shutdowns in key fisheries, such as Dungeness crab. The marine heatwave of 2014-2016 caused an unprecedented harmful algal bloom and closed the Dungeness crab fishery for an entire season. For more information, see this article.

How do marine heatwaves affect people?

A warmer ocean may seem like a good thing, particularly for swimmers and surfers. However, certain fishery declines and toxic algal blooms that may result from marine heatwaves have the potential to impact, or even close, commercial or recreational fishing of certain species. This can result in financial losses to tourism and seafood industries.

Questions are also being raised on how marine heatwaves affect coastal weather, such as marine fog and coastal nighttime temperatures and humidity.  Atmospheric and ocean researchers are currently examining these ocean-weather interactions and how these marine heat waves impact coastal communities.

Marine heatwaves are part of the natural variability of Earth’s climate system, which makes it difficult to tease out the influence that climate change has on these events. However, researchers recently used long-term records of sea-surface temperature to confirm that anthropogenic, or human-caused, warming is triggering more frequent and more extreme marine heatwave events. Scientists are worried that these events may foreshadow the ecological and economic consequences of a warmer ocean overall due to climate change.