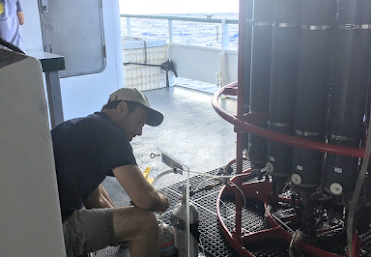 Guest post from postdoctoral scholar Alan Seltzer. Alan was able to travel to Zürich and Barcelona to attend two geochemical workshops and share his research, with support from the Julia R. Brown Fund for Climate Change Research and Education.

From August 15 to 17, I attended the sixth Developments in Noble Gas Understanding and Expertise (DINGUE) workshop at ETH Zürich. I had not previously attended a DINGUE meeting, but I am likely to return for DINGUE VII in Paris in 2021 after having enjoyed ~2.5 days of stimulating discussions and impressive talks and posters. In my view, this workshop represents an essential chance to bring together a community that is united by choice of geochemical tool (the noble gases) but differs widely in applications and analytical techniques. Fundamentally, we noble gas geochemists are linked by our exclusive study of physical processes, made possible by the unique chemical inertness of the noble gases. While my research applies these inert tracers to geophysical systems involving air and water, many attendees of the workshop study noble gases in rocks, mantle gases, and extra-terrestrial materials to answer questions ranging from the formation of Earth’s atmosphere to the modern ocean circulation.

“I’m quite thankful for the chance to attend both of these meetings, at which I not only broadened my scientific horizons but was able to share my last 5 years of research with two distinct, but equally scientifically relevant communities.”

I found the DINGUE workshop to be an engaging setting in which research applications I knew little to nothing about were made accessible because of a common tool. For example, kinetic fractionation processes affecting the noble gases during mantle degassing are intuitive to someone like me, who considers the diffusive exchange of noble gases between water and the atmosphere, even though I know very little about mantle geochemistry. The structure of the workshop was conducive to deep discussions, which were easily facilitated during coffee and lunch breaks as well as meals on the very pleasant roof of the ETH Earth Science building with its beautiful view of Zürich. I walked away from the meeting with new connections to noble gas scientists from around the world and ideas for several future collaborations, each of which involved exchanging analytical techniques across existing noble gas research areas. I am grateful to the Julia Brown Fund for its support in allowing me to attend this workshop as a graduate student. It provided a unique chance to share my science – the development of a new groundwater hydrology tool using noble gas isotopes measured at unprecedented precision – with a community that was sincerely excited about the analytical developments made throughout my PhD.

Immediately after the DINGUE workshop in Zürich, I flew to Barcelona to attend the Goldschmidt Geochemistry Meeting from August 18-23. At this meeting, I was able to share my work with an entirely different community – paleoclimate scientists who use a wider range of geochemical techniques to reconstruct past climate states for the purpose of better understanding underlying processes and predicting future change. My talk at Goldschmidt was well received, and led to several interesting discussions and two possible future applications of the technique I’ve developed focusing on groundwater hydrology in the Middle East and deep ocean ventilation in the Arctic Sea.

I’m quite thankful for the chance to attend both of these meetings, at which I not only broadened my scientific horizons but was able to share my last 5 years of research with two distinct, but equally scientifically relevant communities.