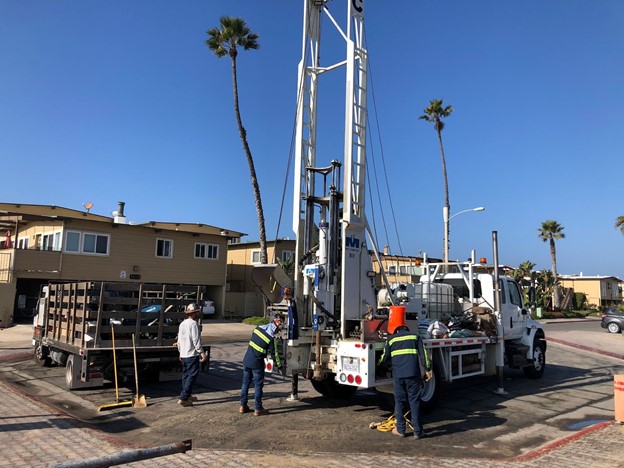 When we think about the impacts of sea level rise, we often focus on how tides, waves, and storms will intensify its impacts. There is another insidious problem – groundwater – that I did not fully appreciate until I began work on a project in Imperial Beach, California. The water table near the coast floats on top of a layer of intruding, denser, ocean water. So as we watch the oceans rise, what we are not seeing is that the groundwater beneath our feet is also rising. In some places in Imperial Beach, especially at higher tides, the shallow groundwater table rises up out of the earth and floods areas of the city that are not directly adjacent to the ocean. Add to this a rainstorm or a large swell event that pushes waves over the coastline, and suddenly Imperial Beach has a disruptive flood event on their hands.

The Center and SIO’s Coastal Processes Group have a long history of working closely with the City of Imperial Beach Department of Public Works and the mayor, Serge Dedina. Since 2019, we have provided flood forecasting based on studies of wave run-up and overtopping on the beach side of the city.   Now as part of a larger NSF-funded project led by Dr. Hassan Davani and Dr. Megan Welsh from San Diego State University, we are looking to help the City predict and understand flooding risks in other parts of the City where groundwater rise will exacerbate flooding under sea level rise.

In December of 2021, we installed four shallow groundwater monitoring wells in strategic locations around the city to continuously sample groundwater depths. With this data, we will be able to quantify how signals of different frequencies (e.g., tidal, storm surge, swell events) propagate through the groundwater and are dampened as they travel inland. Dr. Davani’s group, including Ph.D. students Yousef Sangsefidi and Kian Bagheri, will use our analyses to model the vulnerability of the city’s critical storm drainage infrastructure. Dr. Megan Welsh and her student, Adriana Rios, will study how implementation of green infrastructure and stormwater collection might mitigate the compound flooding effects we anticipate and to what extent these measures would be embraced by Imperial Beach community members. Together, this work will allow us to predict how the groundwater table and city infrastructure will respond to sea level rise differently throughout the city, and most importantly to provide the City of Imperial Beach with crucial information for policy considerations and practical, daily management of flooding events.