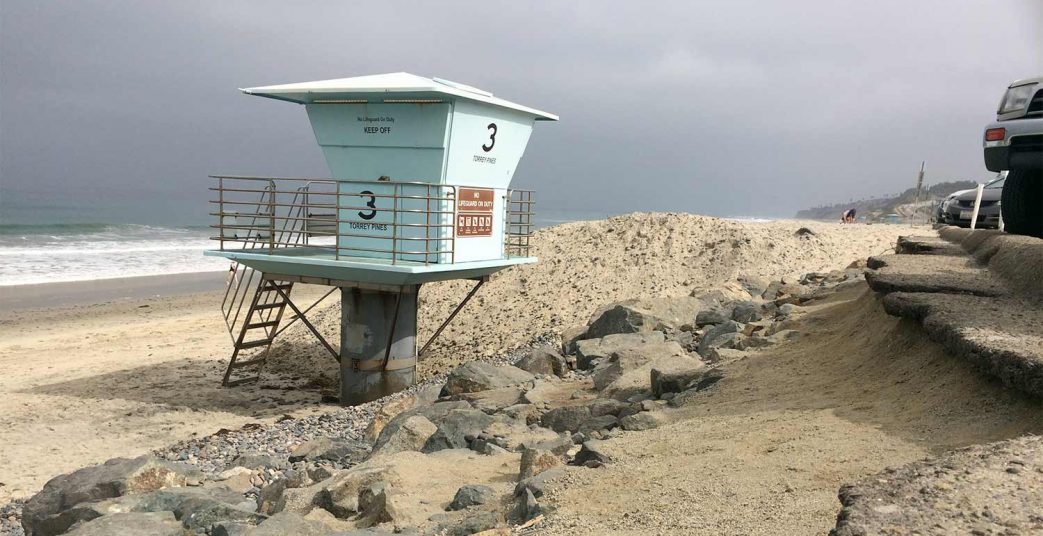 Center staff member Bonnie Ludka led a study of San Diego sand nourishment projects and how they well they fared years later. The study, “Nourishment evolution and impacts at four southern California beaches: A sand volume analysis”, was funded in part by California Sea Grant and was featured on their blog, which you can view here.

New research is shedding light on how mechanically placed sand on San Diego County beaches moves and its potential impacts. The study, published in the journal Coastal Engineering, could help planners develop beach nourishment projects that will reach their intended goals without causing unintended problems. North San Diego County for instance is planning a 50-year, $160 million series of beach nourishments intended to combat flooding and erosion, and provide recreational space for tourists.

“There’s a lot that is not known about how sand moves,” says Scripps postdoc Bonnie Ludka, who led the study. “If you put sand on a beach, it won’t just stay in one place. The question is, how long does it stay where you want it? And as it moves, where does it go?”

For example, sand placed on Torrey Pines beach north of San Diego in 2001 washed away in a single storm. Nourishment sand can also lead to other unintended consequences, as happened at Imperial Beach, the site of the largest beach nourishment in the study. There, 138 Olympic sized swimming pools worth of sand were added to the beach in autumn of 2012. The sand moved both north and south along the coast, and in 2016 contributed to the closure of the Tijuana River estuary. The river lost its connection to the ocean, leading to extremely concentrated pollution and hypoxia—loss of oxygen in the water that can cause die-offs of fish and other aquatic species.

In the study, Ludka and colleagues studied the 2001 Torrey Pines and 2012 Imperial Beach projects as well as beach nourishment projects at Cardiff and Solana beaches done in 2012. Using ATVs, jet skis, and other tools, the research team conducted regular surveys of each beach for over a decade to create elevation maps accurate down to a few centimeters. Using these maps, researchers could assess how the beach changed over time. Using a network of buoys run by Scripps researchers and a numerical wave model they also had a multi-decadal record of estimated wave conditions along the coast.

“These data allowed us to compare the behavior of the nourished beach with how the beach behaved during unnourished times under similar wave conditions,” says Ludka.

Go with the flow

As noted in a previous study by the team, the size of the sand grains made a big difference in how far and fast the sand moved. At Torrey Pines, where sand similar to the native grain size was used for a nourishment project in 2001, all the added sand washed offshore in just one storm, months after it was placed.  Coarser sand used at the other three projects in 2012 largely stayed on the upper beach, even through the El Niño winter of 2015-16, which brought exceptionally energetic waves to the coast.

The researchers also identified a pattern in sand movement that followed the prevailing ocean currents in the area—in winter, the piles of sand stretched southward, while in summer, the sand moved to the north. Overall, the southerly movement won out, and at Imperial Beach contributed to the clogging of the Tijuana Estuary, a couple kilometers south of the placement region.

The study also shows that in some cases the total amount of sand deposited or removed from a beach naturally was even larger than the amounts of sand that were added during the nourishment projects.

Ludka says “We’re still a long way from being able to predict or model how these nourishments will evolve.” But the careful observations provided in this study give a good first indication of how future projects might fare.

Why are sand nourishments needed in the first place? For one thing, climate change is bringing higher sea levels, which could drown beaches if they aren’t able to retreat landward, whether due to an inability of the beach to adjust or existing infrastructure. Natural or living shoreline projects that build up or restore beaches and marshes are gaining attention as a way to build resilience in the face of rising seas.

In addition, sand is a limited resource on California beaches. Ludka explains that sand on beaches tends to come from two places—rivers and eroding cliffs. Dams and cliff stabilization projects have stifled sand contributions from both of these sources. She explains, “The sand budget is like a bank account. The ocean is always making withdrawals. If you don’t add sand back into the system, the beaches will disappear.”

The researchers also note that California has been adding sand to beaches for decades, and in many cases the wide sandy beaches we know were created artificially by the addition of sand dredged from harbors or other construction projects. Ludka says, “In the future, we might have to make difficult decisions about where we invest in sandy beaches, and where other beaches are left to their fate determined by rising seas and limited sand supplies.”

This study received funding from the United States Army Corps of Engineers, California Department of Parks and Recreation, Division of Boating and Waterways, National Science Foundation, and California Sea Grant.